The Final Gift of Beau Brummel

It was Sunday morning and my mother, sister and I were all in the kitchen for breakfast. My chair sat closest to the top of the stairway from the family room, so I could easily turn to my left and see the happenings of this room. Only five downward steps away lay Beau Brummel or while I was growing up with this black poodle of a dog, Bosie. Standing over him was my dad, who was sadly shaking his head. Bosie was not doing well and was apparently due a return trip to the vet on Monday for something my sister and I were not aware of. Nevertheless, we were simply told (warned) on the previous night (Saturday)that he was very, very sick and it definitely showed this Sunday AM.

While growing up, the first routine goal of my Sunday morning regimen was to stay home from church. My dad’s a minister, therefore I’m the son of a preacher man. Cool song, but that’s about it. Otherwise, it’s church every week. No matter how many times or how loud I played the Twisted Sister’s song, “We’re Not Gonna Take It”, I still found myself pouting in a pew on Sunday morning. “Thanks be to God.”  Not really.

I was lucky though . . . actually, my dad would jump all over me for that and correct me, so let’s start that paragraph over.  I was blessed though, because the church we went to was typically over between 11am to 11:30am. However, end time all depended on the sermon durations, kool-aid drinkings, and/or baby dunkings. Normally, I got home in time for the ever important 1 o’clock kick-off time of my Beloved Birds. Yes, I was blessed to have my church wrap up their cult callings in time for my pigskin yearnings.

At this point, I really need to mention the fact that my dad was indeed a minister, but just not at this church . . . nor at any church. However, he’s legit – very legit actually. He was schooled enough in religion to earn his doctorate. But, at this time of his career, he moved beyond individual churches and was chief dog of the pastoral care department in the biggest hospital of D-ware – kind of funny saying something is the biggest in the smallest state.

Nevertheless, my dad’s job at the hospital was to chat it up with the living dead. I know that I’m trying to joke about a very serious subject, but that’s the only way I know how to deal with something of this solemn-tude (made up word). Within this arena, my dad is clearly the man that I will never be. How he can hold someone’s hand while assuring them the afterlife that they both just prayed for, now awaits them at the light at the end of the hospital hallway is beyond me. And to think that while growing up, I would greet him at the door with my lame ass issues of playing baseball, dating chicks, and how annoying my little sister was.

“Hey son, I just watched seven people die today as I assured them that God awaits them at the gates of heaven. Meanwhile, you stand here griping to me about some 16 year old girl who won’t give you the time of day? How about you go Stridex your face for the umpteenth time today and quit taking long showers . . . we know what you’re doing in there.”

Deep down, I wouldn’t be surprised if that’s what he yearned to say; I mean, the man grew up in Detroit. We visited there for one summer vacation. One. That’s all we needed to see. The interesting part of the trip was visiting a home where several of his friends were gathering to meet up with him. Wives, kids, the old gang. Unfortunately, they sent us kids outside to play. In this case, I had to toss around the football with a couple weak armed Michigan want-to-bes. After about 15 minutes of watching them miss and then watching their return throws go everywhere but to me, I headed inside for what I told was a “break.”

Not thinking too much of it, I just walked in. Being summer, it was only the screen door that I needed to open. Being just a screen door, nobody heard the entry made by the kid (me). Loud conversation continued with f-bombs, bullshits, and god damns. Feeling initially shocked, a grin slowly crept across my face as I realized the owner of some of these creative dishings. It was my father – the Rev, as his friends liked to call him. Suddenly, my mom appeared in the foyer and realized what I had just witnessed. I was proud, but she hustled me outside again to the boys of Michigan – neither one became a Wolverine or Spartan.

Alright, so now you know that it wasn’t my dad that I was disrespecting at the front of the church every week. Instead, it was some other dude (or in some cases/stories,  a dudette) that was on stage . . . er, at the podium or pulpit – take your pick. I mention stage, because during the church’s annual Christmas Pageant, people would always say that I could do it because of my dad. Are they saying my dad is acting up there? Hmmmm. 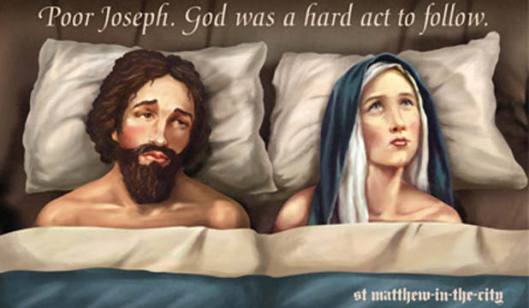 (not in the pageant, but still very funny)

Actually, for one Christmas Eve show, I forgot my lines. Went blank. Congregation stared. Instantly, I hated Christmas. Bring on New Year’s. During this forgetful mishap, I knew what was supposed to happen next, but didn’t have the words to get there. In turn, I randomly waved the kid on and pointed for him to continue. Who knows – maybe the audience thought it was the other kid, but I’m guessing that my wide eyed dumb look gave myself away. I was also very open about screwing things up afterwards. FYI – anyone who really knows me; realizes that I moved past my disdain to Christmas. In fact, when people ask me about my religion, I tell them that I believe in Santa – love the guy.

That leads us to questioning God. “Wait – what about Beau Brummell?”  Okay, I’ll get back to the dog lying at the bottom of the steps, but I don’t write about these religious tangents too much, so I’m running (typing) with it. Back in the same church that I went blank on Christmas Eve on its stage, I questioned the existence of God with my Youth Group. Now, for these groups, this is probably a common topic that could creep up, especially at this teenage age. But remember who my dad was – which meant, I was a P.K. (Preacher’s Kid). Holy Shit said the church ministers . . . internally, of course.

That was quite a time. Everyone had a different story or tale or happening to prove the existence of God. Basically, what it came down to, they scared me into believing because when my parents die, they will go to heaven. “Don’t you want to go where your parents will be?”  Uh, thanks. Where do I sign up for the “I believe in God club”? I’m sorry, but the stories, tales, and happenings were lame. But that junk about going where my parents are going or not, that scared the crap out of me. I chanted out what I was supposed to, got baptised, and became a member of the church.

Funny side note – We had a lock-in that Saturday night prior to the big baptism day and church member day. A lock-in. With teenagers. They let us wander around and a small group of us began playing strip poker. I was winning when they caught us all. If they told me that God had created the breasts that I had just seen, my faith would have become so much . . . stronger. Notice how I didn’t write the easy joke out of “harder.”  All class here. 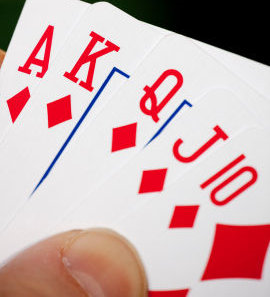 (oh – the goodies you can see with a hand like this)

Back to the dying dog. I loved that dog. My mom had him prior to my little sister, me, and my dad. That dog allowed us into its life. In turn, I only got to know when he was old. Dogs as puppies are awesome and that’s when I think they build their loyalty the most. Nobody messed with my mom when Bosie was nearby. Toy poodle with a dude. He owned the La-Z-Boy Chair in the family room. Nobody else could sit there at the end – his chair. We had to put a towel on it though because he was slower and slower reaching outside in time. In fact, back in the day, he would walk near the back door and bark in order to instruct us to let him go outside for his business. Towards the end, he would just head over in that direction. If you didn’t join him fast enough to open the door, he’d piss right there on the carpet. I loved that dog. 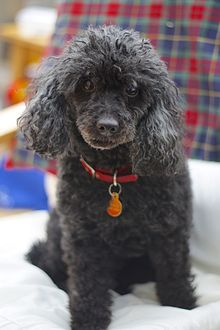 Back to the original scene of this short – dog dying at the bottom of the steps, dad standing over him shaking his head and repeating, “he’s going”, my mom and sister start crying, and me – sitting there wondering if we would be going to church or not. Today was a big one – it was freaking Easter. Bet that holiday never had that adjective before. Anyway – we ended up staying home from church because of the loss of our dog, Beau “Bosie” Brummell. I loved that f’in dog.